CAPTAIN THOMAS ABLE BRIMAGE SPRATT RN (you’ll know of him by now if you have been paying attention), in 1851, visited Crete for surveying purposes which involved an archaeological exploration of the island. One of his interesting discoveries was the way in which relative levels of land and sea had changed over the island in historic times.  Following a meeting with the geologist, Sir Charles Lyell, he wrote to him to clarify a point about the island’s movement:

“Dear Sir Charles, Fearing you may be impressed with the idea that the eastern end of Crete had gone down as much as the west. I am induced to write a line to rectify it, if so; and to state that movements in the eastern half of the island have neither been as great nor apparently as uniform as the western movement. Both are subsequent to the historic period and the evidences are in both instances indicated by the elevation or partial submergences of some ancient Greek building or city.”

The letter was written on the on the 28th of February 1856, which was a Thursday. The two must have met the previous evening because the following day Spratt wrote again to Lyell confirming the situation, perhaps as an afterthought:

“My dear Sir Charles, You understood me quite right on Wednesday evening in respect to the fact that the western half of Crete having been elevated, and the eastern half depressed or gone down a few feet.”

The submergence of the east coast can be seen today at the Minoan palace site of Kato Zakros – part of it is underwater even in mid-summer (pic below).

However, the movements were not restricted just to the east and west tips of the island. Spratt observed that there was a maximum elevation of nearly 26 feet occurring on the south coast at the base of the White Mountains to the west of Sphakia, 17 feet to the extreme west of the island and declining to 6 or 7 feet along the north coast to Suda Bay.  He added that “all the ancient cities included in this line of coast have been affected by the elevation by the conversion of their ancient ports into dry land.”

At first, for some reason, he found this puzzling, not thinking until a little later, that the elevation must have “occurred subsequent to the existence of these cites” (all in the letter, Spratt to Lyell, letter, 29th February 1856)

Spratt had discovered this movement when searching for evidence of the ancient port of Kutri at Phalasarna on the western end of Crete.  He noticed possible ancient activity, some distance from the sea and wrote to his friend (a seasoned traveller of the Greek mainland), William Leake:

“On going to Phalasarna I looked for its ancient port, mentioned by Scylax … but I could find no artificial work in the sea. There is however, a long ledge of rocks, or rather an islet which lies off it, helping to form a natural but not an artificial harbour. This satisfied me in part, till, on examining the ruins, I saw in the plain a square place enclosed by walls and towers, more massive and solid than those of the city … I was instantly impressed, for several, reasons, that here was the ancient port or artificial port, although full 200 yards from the sea and nearly 20 feet above it. My first idea was, that the ancients had a means of hauling their vessels into it as a dry dock; but at last the coast elevation was uncumbered(sic?) and on measuring the sea mark at its upper level here I found that the bed of this anc[ient] port is now 3 or 4 ft below that level.” (letter Spratt to Leake, letter, 18th September 1853).

Then Spratt recalled a visit to the island of Cerigotto (Antikythera) where he had noticed an elevation of coastland and it occurred to him that the same may have taken place on Crete. He then measured the sea-marks at Phalasarna which convinced him that it had – the new sea marks were three feet below the old marks (plan below). This justified his theory that the inland “quadrangular space enclosed by the unusually massive Hellenic [Hellenistic] walls upon the plain in front of the chapel of Aghios Giorgis” was, indeed, the port.

In his above letter to Leake, he originally dated this movement of the island to a date prior to history (that will be prior to Greek writing of 776 BC). but was unsure, suspecting a more recent date due to a possible change in the markings on the landscape – concluding with a period “subsequent therefore to the decline of the Roman Empire [5th century AD]”.  In his journal he dated it to the late Roman period. Indeed, the tectonic displacement has been dated to the 5th century AD. 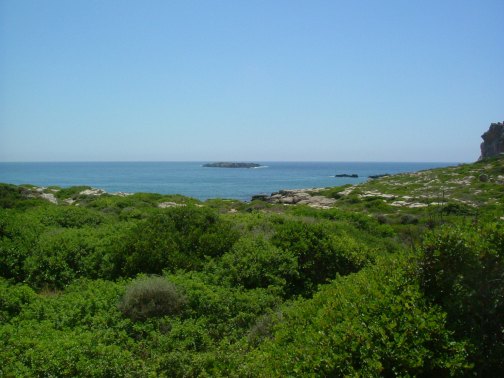 View to coast from the now ‘inland’ harbour at Phalasarna today

Crete being in an earthquake zone it is hardly surprising that it has moved about somewhat over the centuries, much to the initial confusion of earlier ‘investigators’ such as Spratt. But he was made of sterner stuff and was admirably able to resolve the inconsistencies before him.

Next week: Lets’s go to Mycenae

Whilst travelling in Greece, I was invited to play cricket for the British School [of Archaeology] at Athens. My very good friend, Sir Mortimer Double-Dealer (a rival sportsman) needed to contact me and he telephoned the clubhouse where I was playing. He was told that I had just gone in to bat. “That’s all right,” he replied, ”I’ll hang on.”

One thought on “Crete: the island that tipped”