SO WHAT EVER HAPPENED to Minoan Crete? Well, we don’t really know. All the palace sites, bar Knossos, we destroyed around 1450 BC but whether by man or nature is unclear. If by earthquake then why not rebuild as had been done before? It was once thought that the volcanic eruption at Thera (now Santorini, the island due north of Crete) may have caused the downfall of the Minoan civilization (either by volcanic ash or tsunami) but the dating doesn’t fit (the volcano was either between 1627-1600 BC according to radiocarbon dating or 1550 BC if you go along with Egyptian dating references).

What we do know is that the Mycenaeans from mainland Greece took over at Knossos. This is evidence by, amongst other ‘things’, Linear B (ancient Mycenaean Greek writing) which was found at Knossos. We need to be careful with the use of the word ‘Greek’ here. Greece didn’t exist as a country during this period (Bronze Age 3000-1100 BC); it was made of various kingdoms, one of which was Mycenae in the Argolid on the Peloponnese of mainland ‘Greece’ (or maybe Ahhiyawa – a name on Hittite texts which could possibly be the Mycenaeans -or Achaeans as Homer referred to them). Remember, this is prehistory so we can never be sure of anything. You can almost make it up as you go along and few could dispute you. Well, as long as you were vaguely sensible about it all……..

Now the citadel of Mycenae was impressive. It was a fortress and constructed by warmongers.

‘bird’s eye’ view of the citadel of Mycenae – very defensive (Grave Circle A is foreground centre – the circular bit, get it? – and the Lion Gate entrance is to the left of it in the shadows)

It’s not surprising that it took over Minoan Crete. It was a war-machine. And Crete was positioned central to three continents: Europe, Asia and Africa; so whoever controlled Crete, controlled a major trade link and have been very wealthy. Mycenae would have liked that idea.

and just to give you an idea of the size of the stones leading up to the actual Lion Gate, Sarah is a scale

Heinrich Schliemann excavated at Mycenae in 1876. But he didn’t discover it as its Lion Gate entrance had been open to the world to see from at least the beginning of the 19th century (the Brit. Edward Dodwell had drawn a picture of it in 1805). However, Schliemann opened up the entrance and the Grave circle A just inside the entrance. Here he found treasures buried with the dead, including the ‘Mask of Agamemnon’. Had he gazed on the face of Agamemnon as he claimed (allegedly). Well, no. If Agamemnon had existed it would have been around the destruction of Troy circa 1250 BC (more on that another day). The mask was dated to 1600 BC. Maybe Agamemnon’s great great great ….. grandfather. Maybe not. 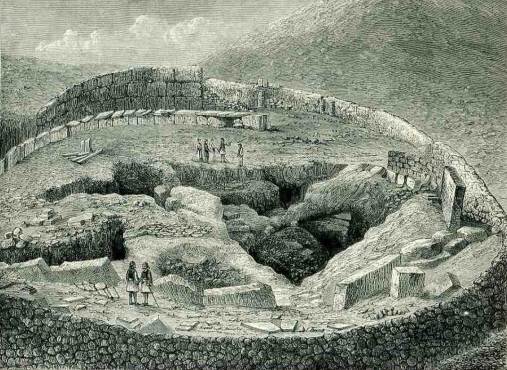 The ‘mask of Agamemnon’ – well, not really

Also at Mycenae we can find the impressive tholos tombs of Agamemnon (aka Treasury of Atreus – but it’s not a treasury) and Clytemnestra (circa 1250 BC). Clytemnestra was Agamemnon’s wife who did away with him on his return from the Trojan War (woman scorned and all that). This is according to Homer, an oral poet of around 750 BC (more on him later). They are, indeed, tombs but probably not of Agamemnon or Clytemnestra – it’s poetic licence (sorry, I’m being a spoilsport). On the other hand, check the dating out ………… 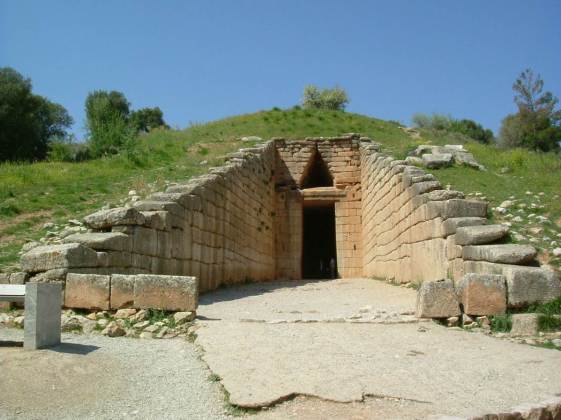 The Tomb of Agamemnon, aka The Treasury of Atreus – well, neither actually 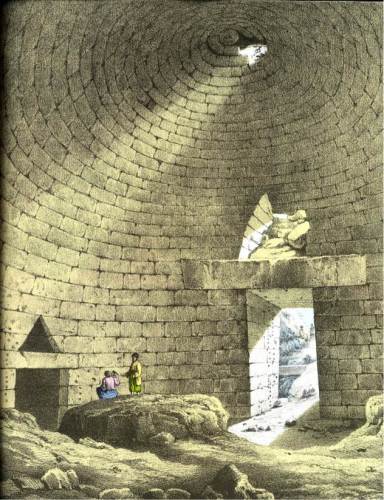 19th century drawing of the inside of the Tomb

So what happened to the Mycenaeans. Well we don’t really know (heard that before somewhere). They just came to an end and that’s that. If a Trojan War really did take place with the Mycenaeans and allies besieged Troy then it may well have weakened its position on the home front. Whilst the ‘cats are away’ in Troy, ‘the mice do play’ at home. The ‘mice’ may have been disgruntled peasant taking advantage of their masters’ absence. Who knows……

Next week: the forgotten tholos tombs at Mycenae

In December, I had been visiting the Ashmolean Museum in Oxford to deposit some finds I had recently discovered in Tiryns.  On departing, I observed a member of the constabulary writing a parking ticket. I approached him and said, “I say, Officer, it’s Christmas, give a chap a break.”

He ignored me and continued writing the ticket.

He stared at me, then at a worn tyre on the vehicle and wrote another ticket.

He noted a cracked light and wrote another ticket.

He wrote another ticket for a faulty bumper.

Well, this went on awhile – the more abuse I gave him, the more tickets he wrote.  By the time I had run out of expletives he had planted some dozen or so tickets on the windshield of the vehicle.

Of course, it was no concern to me as my vehicle was parked around the corner.