I WAS LUCKY enough to have been able to attend a talk last month by Dan Snow on the Mary Rose  at the Mary Rose Museum (it was open to Patrons and Friends of the Mary Rose and I was invited by a Patron – Sarah). Now I know I talked about the Tudor ship before this year (see post March 21) but that’s not the purpose of this post – not entirely anyway, but I don’t intend to repeat anything said in that previous post. One of the most interesting factors of Dan’s talk was his references to the history surrounding the ship rather than the actual ship itself.

He reflected on the fact that the ship was the ‘missing link’ in the history of war at sea. Well, no longer ‘missing’ of course. In the ancient world war at sea was simply a matter of transporting soldiers on ships to the opposition, also featuring soldiers on ships. The two ships would then grapple together and the soldiers would board the other ship and fight hand-to hand. As time went on bows and arrows were a little more prominent as a form of ‘artillery’. It wasn’t until the 16th century that the idea of firing cannons at another ship became an interesting way of winning a battle. If the ship sunk or was immobilised its soldiers could not fight. Henry VIII came to this conclusion hence the Mary Rose was the first ship to carry large cannons for this purpose when she was built in 1510/11. 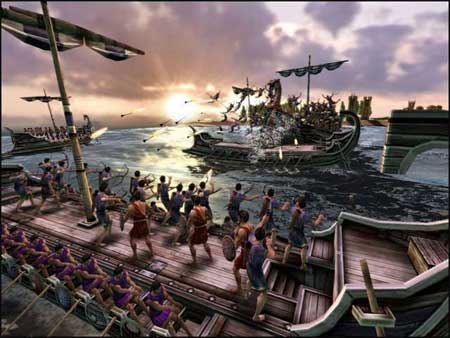 The problem was the weight of these cannons (or guns) which required much re-reinforcement to ship’s design and may have been a part-cause of the Mary Rose’s demise in 1545 – imbalance of weight following her re-fit and enlargement in 1536 (but the sinking was looked at in my previous post so we won’t go there again).

Heavy cannons of the Mary Rose

So the so-called ‘Battle of the Solent’ was a turning point of sea battles. I use the word ‘battle’ loosely as it was not much of a battle – in fact, had it not been for the sinking of the Mary Rose, it would have been quite forgettable. Anyway, sea battles afterwards were never the same again. Soldiers made way for cannons and sea warfare turned into a ‘slugging-it-out’ of heavy ironware. Trafalgar of course leaps to mind as a very obvious example. This really went on into the 20th century. The last heavyweight sea battle of ships at war was probably the Battle of Jutland in 1916 (I refer to it in advance of its anniversary next year).  Although the Second World War had its share of sea fights (sinking of the Bismark, etc) but there were none as large as Jutland. Aircraft have taken over from soldiers and ships as battle-winners and some ships have become transportation for those aircraft – sort of full circle for ships usage in warfare.

Image of the Battle of Jutland

An interesting misconception that Dan raised was this idea that the United Kingdom had never been successfully invaded again since 1066. This was not at all true. We have been invaded several times since which is why our monarchs over the years have not always been English in origin – we have just not been invaded by a large sea force. This led onto another misconception that the English Channel had protected us from invasions. It was never the English Channel as such but the ships of our Navy. 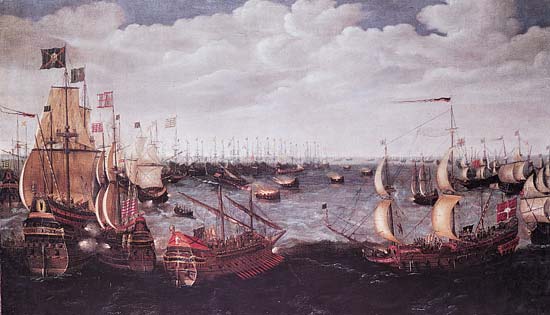 British navy projecting our shores against the Spanish Armada in 1588

Questions at the end raised some intriguing issues. Dan was asked which, he thought, was our worst defeat at sea.  Winston Churchill’s fiasco in the Dardanelles in 1915 immediately sprang to my mind but Dan’s far superior historical knowledge identified the Battle of Chesapeake (or Virginia Capes) in 1781 off Virginia. It was against the French and although the battle was tactically inconclusive it was strategically a major defeat for the British since it prevented the Royal Navy from reinforcing or evacuating the blockaded forces of Lieutenant General Lord Cornwallis at Yorktown Virginia.  Dan observed that for success the French only needed a draw, the English needed a victory. It was a draw and resulted in Cornwallis’ surrender and a turning point, two years later, to the British recognition of the independent of the United States of America.

Another question was what Dan thought about the treatment of Nelson’s Lady Hamilton. His answer was a little evasive – he should have read my post last week!  But that was followed with a conversation Dan would have most liked to have witnessed – the one between Nelson and Wellington (then Sir Arthur Wellesley but the youngest Major General in the British army) whilst they were waiting in an anti-chamber in the Colonial Office at Downing Street on the 12th September 1805 to see Lord Castlereagh . The details of the meeting are a little unclear (Nelson is said  not to have recognised Wellesley and treated him with indifference before leaving the room, only to return a different man – having, perhaps, being told who Wellesley was) but there ensued a lengthy conversation between the two militarily geniuses, unfortunately unrecorded.

Nelson and Wellington – interesting conversation between the two? 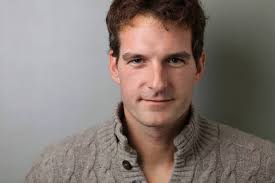 Thanks Dan – and the Mary Rose Trust – for a great talk