I FIRST BECAME interested in medieval books when I was given an introduction to the Book of Kells many years ago.  This is a group of manuscripts of the four gospels of the New Testament dating back to the 9th century AD (its exact date is unknown for sure). Today it comprises of 340 folios (pages) bound in four volumes. It takes its name from the 9th century Abbey of Kells (in County Meath, Ireland) where it was situated for most of its existence – until the 1650s when it was sent to Dublin for safe keeping against Cromwell’s motley troops. It then found its way to Trinity College, Dublin, in 1661, where it remains today.

Illustrated page from the Book of Kells

My interest was rekindled when I visited the Winchester Bible. This is another fabulously illustrated book on show at Winchester Cathedral. It was produced at the Cathedral between 1160 and 1175 and is the largest surviving 12th century bible (468 folios, 583 x 396 mm). It’s in Latin of course and written on vellum [1]. It was described in 1622 as two volumes and has been rebound twice since – in 1820 into 3 volumes, and in 1948 into 4 volumes. The text is in the hand of one scribe and  is complete but many of the illustrations, which are the work of 6 different contributors, are not finished. Sadly some nine illuminated initials and at least one full-page illustration have been removed entirely and are now in the hands of private collectors  (I’ll say no more – other than one missing leaf is in the Morgan Library in New York …. can we have it back please?). 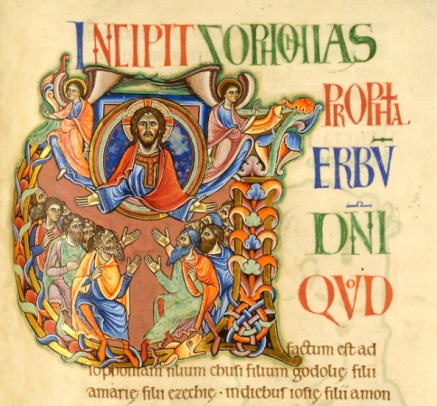 Illustrated page from the Winchester Bible

Needless to say there is only one copy of each of these two medieval manuscripts so you cannot own them!  But you can own an original copy of the Book of Hours – at a price. These books are of prayers and get their name from the fact that monks have to pray at certain hours of the day (and night).  Saying that, they were produced for the laypersons as well – thousands of them in fact. And quite a few still exist today. Initially they were handwritten and illustrated with miniatures [2] on vellum.  By the early 16th century they became even more popular and the printing press took over from the laborious handwriting [3].  Printers churned out copies of the book but many of them still contained hand-coloured illustrations and lettering.

Although many of these books can be purchased today they don’t come cheap. Their price depends, of course, on the quality and quantity of illustrations.  Also size – many are very small for portability (averaging around 6″ x 4″ – 15 cm x 10 cm). Hand-written copies vary very much from $20,000 to $500,000 – although I believe the most expensive is the Rothschild Prayer Book (of Hours) which went for $13.5 million (£8.5 million) in 1999 at Christie’s in New York, purchased by Kerry Stokes and now lives in the National Library of Australia, Canberra. 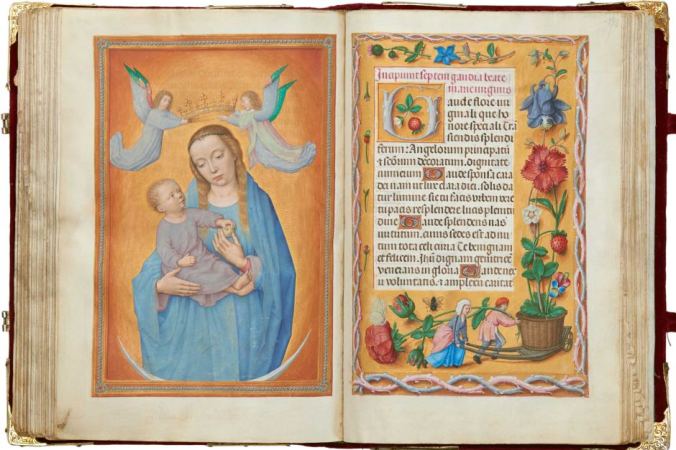 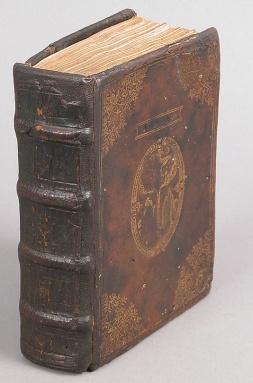 The 16th century printed version comes in at around $30,000 (again depending on quality). Even quality facsimiles can fetch anything to around $3,000-$5,000 if not more. There are cheaper versions though – a Hungarian company produces (or produced) some of these. If you are desperate to get your hands on a taster, single leafs can be purchased from anything from $200 upwards into the stratosphere – again depending on how they are illustrated and whether they are handwritten or printed. The big problem here is that it means someone has broken a book up to sell these off separately which is sacrilege in itself. But it’s a means to an end (and, sorry, yes I have one such page …..).

My humble c 1450 leaf – it’s handwritten with nice elaborate gold leaf letter but not, obviously, illustrated (I’m doing a course on Medieval Latin so I’ll get back to you when/if I ever translate it!)

[1] Vellum comes from the Latin word ‘vitulinum’ meaning ‘made from calf’. It is estimated that the hides of some 250 calves were used for the Winchester Bible ….

[2] This word ‘miniature’ comes from the Latin term for medieval illustrated book rather than small picture.

[3] The first printing press was introduced in the Holy Roman Empire by one Johannes Gutenberg in 1440. Documents printed before 1501 were known as incunabula (or incunable).

Late one night, a preacher with whom I am acquainted, The Rev. Jacob Aramatic, was driving on a country road and had a crash.

A farmer on his tractor stopped and said, “Sir, are you okay?”

The Rev. Joseph said, “Yes, thankfully I had the Lord riding with me.”

The farmer said, “Well, you better let Him ride with me, because you’re gonna kill him.”

2 thoughts on “Buying a Book of Hours”