ONE OF THE four Inns of Court in London is Middle Temple – or more formally known as the Honourable Society of the Middle Temple. The other three are Inner Temple, Lincoln’s Inn and Gray’s Inn, all in close proximity of each other, and they are where barristers work and, in some cases, live – in fact, in the early days it was were many of them did live communally, hence the name ‘Inn’. Middle and Inner Temple were once referred to as Middle Inn and Inner Inn of the Temple. I’m only going to talk about Middle Temple because it’s my Inn of Court, so there.

It’s called Middle Temple because the land it stands upon was once owned by the Knights Templars. In fact, the Temple Church which stand in the grounds today (see below) was built by them in 1185. The Knights Templar (they were mainly English and French) came into existence 895 years ago almost exactly. How many days more depends when you are reading this as it was Christmas Day 1119 that nine knights took monastic vows to protect pilgrims travelling from Western Europe to the Holy lands of the Levant. This was as a result of conflict between Christians and Muslims (nothing much has changed in nearly 1000 years). These knights were initially called the Poor Fellow-Soldiers of Christ and the Temple of Solomon – Knights Templar for short. They came to an end in 1312 (Friday 13th October in fact – hence Friday 13th being supposedly bad luck) when King Philip IV of France, who was in with the Pope Clement V, persuaded the General Council of Rome to suppress the Order of the Templars. Philip was in great financial debt to the Templars – get rid of the Templars, get rid of the debt. Nice one Phil. It’s not what you know …… Anyway, in England the Templar properties were given to another military monastic order, the Hospitallers (or Knights of St John). For more on Templars click here.

Cutting a long story short, the King’s courts moved from York to Westminster in 1339 and the judges needed to be nearby – and that is when the four Inns of Court were set up. At that time it was judges of the Inns that ‘Called’ advocates to the Bar to follow them in the King’s court (then the Common Pleas or Commons Bench). These advocates were called serjeants-at law (servientes ad legem) but they ‘went-out-of-use’ in the late 19th century and were replaced by senior barristers known as Queen’s Counsel (QC) and junior barristers (who are all ‘Called’ into their respective Inns).

Middle Temple was rented to the lawyers by the Hospitallers until the Reformation of Henry VIII in the 16th century. The Crown then became its landlord until the reign of James I in 1608 when it obtained clear title to the land. Hooorah! Sir Walter Raleigh was a Middle Templar; Sir France Drake was not – but the cover hatch to his Golden Hind is still used today as the table to which Middle Temple barristers are Called to the Bar having qualified. Fine piece of useless trivia. And more – William Shakespeare’s Twelfth Night was first performed in Middle Temple in 1602 (there are several ‘Inn’ jokes to be found in the play).

Middle Temple Hall was built between 1562 and 1574 under the guidance of the Treasurer, Edmund Plowden. He employed the services of Sir John Thynne’s chief carpenter, John Lewis, to construct the hammer-beam roof (similar to the one he had created at Longleat). By the late 16th century the four Inns of Court were known as the third University (after Oxford and Cambridge, of course) and Middle Temple was the centre of education for potential lawyers of that Inn (and children of the nobility). Much of the learning was achieved by attending moots (mock trials) and dinners to discuss law – both traditions still continue today wherein student barristers have to attend 12 dinners in Hall before they can be Called to the Bar and mooting is a competitive activity. 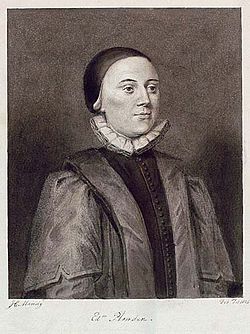 During the Second World War, on 15th October 1940, a landmine on a parachute destroyed the eastern gable of Hall and the Elizabethan minstrel’s gallery. It was painstakingly restored and reopened in July 1949. In fact, Middle Temple as a whole suffered quite badly due to bombing during the war – it lost 122 of its 285 sets of chambers (sets of ‘offices’ where barrister work). But it’s all better now.

The eastern gable and minstrel’s gallery in Hall ……… 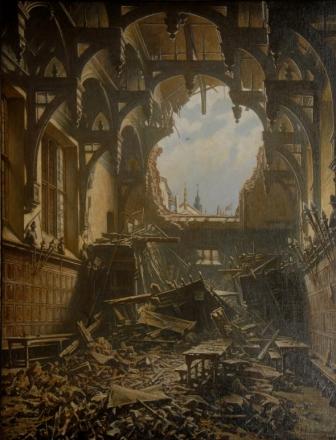 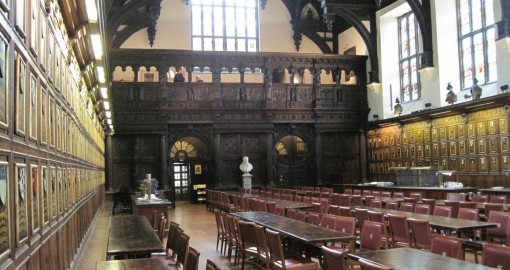 …. and after (that’s Plowden’s statue in the middle)

As mentioned above, Temple Church was built in 1185 and is one of the oldest churches in London. Templar churches were always built to a circular design to remind the Templars of the Church of the Holy Sepulchre at Jerusalem, which has a round dome above the site of the sepulchre where Jesus was buried. The church is still used today as a place of worship by both Middle and Inner Temple members and guests on Sundays. It’s well worth a visit and it’s open most days to the public.

The film buffs among you will recognize it from its appearance in Dan Brown’s The Da Vinci Code. Hanks & Co are looking in the church following the clue: “In London lies a knight a Pope interred. His labour’s fruit a Holy wrath incurred. You seek the orb that ought be on his tomb. It speaks of Rosy flesh and seeded womb.” I forget what they found – other than trouble, but ‘the knight a Pope interred’ would have been one of the effigies of the Knights Templars that are on the floor of the circular part of the church. They include William Marshall, first Earl of Pembroke, and his son, William Marshall, second Earl of Pembroke. The first earl was chief adviser to King John and regent to Henry III until he came of age; the second earl was a witness to King John signing the Magna Carta in 1215 (more on that next week). 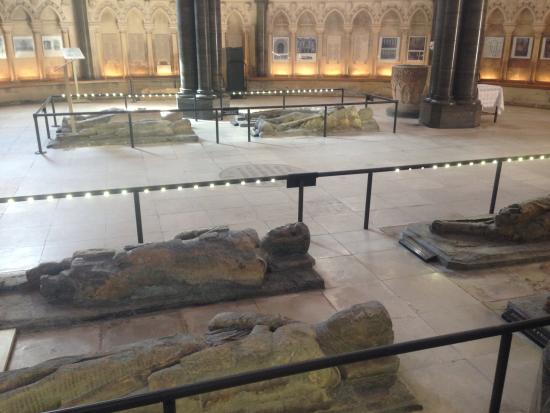 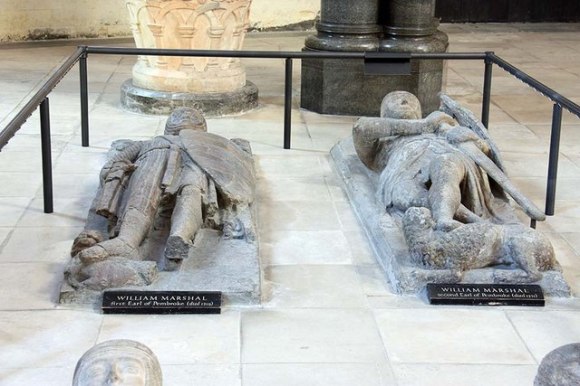 The Earls of Pembroke (dad to the left)

I received a letter from my good friend Joshua Barts-Hofner, a bit of a wit and jolly good rugger player. The letter read as follows:

It was our thirtieth wedding anniversary last week and my adorable lady-wife asked me to describe her after all these years. I looked at her for a while, then said, “You’re an alphabet wife ….. A, B, C, D, E, F, G, H, I, J, K.”

She asked … “What on earth does that mean?”

The swelling in my eye is going down and I’m darn glad I took out dental insurance. 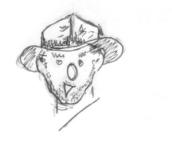 One thought on “Middle Temple and Temple Church”