I AM WELL AWARE that opera is not everyone’s bag but it can be quite fun and you should have a go before knocking it.  It’s just  a case of picking the right opera first time around or you could go badly wrong and be put off for ever!  Opera at Glyndebourne is usually always fun particularly because it has a lengthy interval where one picnics in the gardens. Don’t get me wrong – that’s not necessarily the best part of the opera (honest) – although when you pick the wrong one it certainly is.  Before I became a member of Glyndebourne (after 20 years on the waiting list!) tickets were (and still can be for non-members) difficult to obtain and I’d apply for anything.  This did not always end with a good result ……

Spike Hughes, in his 1965 book, Glyndebourne, starts off by observing, “All Opera Houses are unique, but – as anyone who comes into contact with them soon discovers – some are more unique than others. It is clear from the very first, however, that Glyndebourne was the most unique of all.”  This is very true – and it still is the most unique of all.  So how did it all begin?

The actual house at Glyndebourne in East Sussex is a delight. It dates back to the 15th century but not much, if any, of that is now visible today. Glynde Bourne (as it was in the early days) was part of the manor of Glynde until the 16th century when it was supposedly given as a dowry to Mary Morley on her marriage, in 1589, to John Hay of Herstmonceux (remember that place? – see March 14 post) – although a record of this  has not been found. However, it seemed to have been purchased by Herbert Hay in 1616. It remained in the Hay family-name until 1804 with the death of the last remaining Hay, a spinster, Frances Hay, whereafter it was inherited by a 74 year-old cousin, Canon Francis Tutté (appropriate surname bearing in mind what was to become of the house!). Francis Tutté’s mother was Barbary Hay who had married William Tutté (a barrister).  Francis died in 1824 and the house passed to James Hay Langham (a descendant of Sarah Hay who had married John Langham in 1650).  Get it so far?

Front of Glyndebourne house today (opera theatre behind to the left)

James relinquished the property on succeeding to his father’s baronetcy and moved to the family seat in Northamptonshire (although there was some question of his lunacy, but we won’t go there) and Glyndebourne house went to Langham Christie in accordance with the will of the last Hay sisters, Henrietta and Frances (the latter referred to above).  It was Langham Christie’s son, William, who, after inheriting the property in 1861, made substantial alterations to it in 1870 – he built a brick extension hiding the house’s 17th century flint facade, with additional ornate stone-work and balustrading.  In 1876, decorative brickwork was added to give it the Jacobean appearance as can be seen today (pic above and below).

Rear of Glyndebourne house, with ‘new’ opera theatre (to the right…. obviously)

William also built an Eton fives court with a rough brick floor making it impossible to play on (no comment!).  His grandson, John Christie, said that he (William) had appalling taste (harsh!).  It was John who inherited the house after the death of his grandfather in 1920. And it was John who turned it into an Opera venue. He was an Eton boy and, being fond of music, he held regular amateur opera evenings in the newly built organ room. This 80 ft (24 m) room practically doubled the length of the south facade of the building (the right side of the house in the pic above) and housed one of the largest organs outside a cathedral. This organ was constructed by Hill, Norman & Beard Ltd and purchased by John in 1923. Only the case and console remain in the room today as John donated the soundboard and pipes to the rebuilt Guards Chapel, Wellington, which had been destroyed in the blitz. 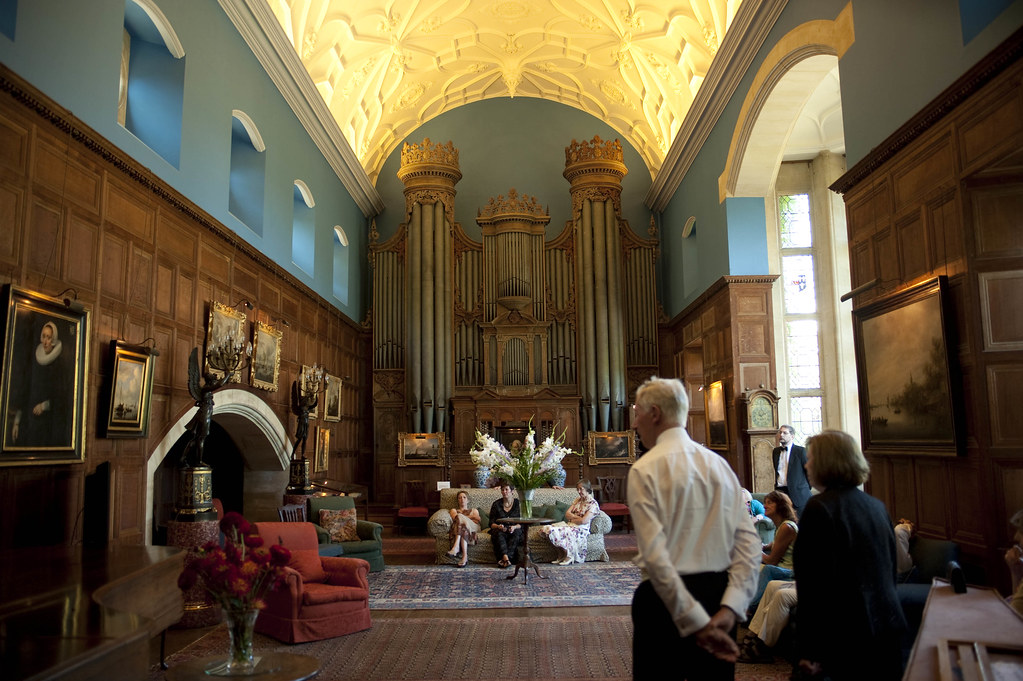 The Organ Room and non-working organ

It was at one of these opera evenings that John meet his wife-to-be, the Sussex-born Canadian soprano, Audrey Mildmay, who sang with the Carla Rosa Opera.  They were married in 1931 and on their honeymoon they attended the Salzburg and Bayreuth festivals which gave them the idea of bringing professional opera to Glyndebourne. The rest is, as they say, history. Well, sort of ……

Picnicking during the long interval at Glyndebourne

The first performance was in a newly-built 300-seater theatre on the 28th May 1934 and it was Mozart’s le nozze di Figaro followed by his Cosi fan tutte (non-opera readers will now get my reference to Canon Francis Tutté above). This theatre was then enlarged two years later to hold 433 seats; then by 1960, nearly 600 seats; and by 1977, it seated 800.  In 1952 the Glyndebourne Festival Society was formed to manage the opera and was opened up to members (as it is now …. well, the waiting list anyway).

John died in 1962 and the house and opera were taken over by his son, George (later, in 1984, Sir George) who continued improving the opera theatre until 1994 when the lavish new theatre was constructed, seating around 1200 people. Sir George retired in 1999 and sadly died last year in May (2014). His son, Gus, took over the opera festival on his father’s retirement (and the house two years after that – they swapped houses) .

Last week was the 50th birthday of my friend, Tracey, and we celebrated it, inter alia, with a visit to Glyndebourne which was performing Bizet’s Carmen which is always good value and rousing fun (well, provided you ignore the plot!).  On that day, it rained most the morning and early afternoon, and it rained all the time during the drive over, but when we arrived the sun came out and stayed out so we were able to picnic in the gardens (whilst the majority who had arrived earlier, when it was raining, had crammed into the covered terraces around the theatre – ha!).

Glyndebourne gardens – Tracey, Simon and myself (above) enjoying the long interval for Bizet’s Carmen (below)

My nephew, Titus, and his wife, Cordelia, visited the USA and were driving through Louisiana. As they approached Natchitoches, they started arguing about the pronunciation of the town. They argued back and forth, then they stopped for lunch at one of those new fast-food restaurants. At the counter, my nephew asked the young waitress, “Before we order, could you please settle an argument for us?  Would you please pronounce where we are very slowly?” She leaned over the counter and said slowly, “Burrr-gerrr Kiiing.”