IF YOU HAVE been reading my past bogs you will realize that one of my passions is Crete. I’m also interested in the early travellers to the island and what they found there before archaeological became ‘fashionable’ following Sir Arthur Evans’ excavations at Knossos in the early 1900s. Most of these early pioneers were either members of the clergy, the legal profession or the military,  maybe because they had nothing better to do (but let’s not go there). Anyway, I like to bring some of these fellows to the fore as I fear their names have been lost in the passages of time (see my books, In Search of Agamemnon and Dawn of Discovery on MY PUBLICATIONS on this blog – go on, buy one, you know you want to …..).

One such traveller was Richard Pococke. He was a member of the clergy and he visited Crete in 1739. Archaeology was not ‘something’ one did in the 18th century but Pococke was in search of ancient cities. He was, perhaps, the first British/Irish travel to the island to consider the existence of an ancient civilization. I was looking to see if he had found anything of the Bronze Age – then not a term used – before Arthur Evans’ great discoveries.

There have been certain interesting views of Pococke. He was believed to be a man of “mild manners and primitive simplicity … In his carriage and deportment he seemed to have contracted something of the Arab character [see pic below], yet there was no austerity in his silence, and though his air was solemn, his temper was serene” (Cumberland, from Kemp, 1887, Tours in Scotland, 1747, 1750, 1760, Edinburgh University Press).

In 1761, a Mrs Delaney described Pococke as “the dullest man that ever travelled …” (Quane, 1950, ‘Pococke School, Kilkenny’ Journal of the Royal Society of Antiquaries of Ireland). This may have been because he had no time for small talk or tittle-tattle at her tea parties (‘woman scorned’ …..). Whatever her view, Pococke was certainly not dull with regard to his travels. Kemp, the 19th century biographer of Pococke’s tour of Scotland (above), reported that “His [Pococke’s] contemporary, Bishop Forbes, has preserved a pen-picture of Dr Pococke … and represents him rather as a pleasant, genial, jocular man, able to adapt himself to every circumstance and society – qualities essential to travel.” 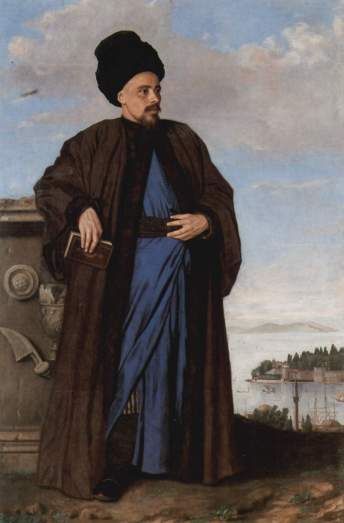 Pococke in his ‘Arab’ attire

On arriving in Khania (Canea) on the northwest coast of Crete he called upon the “only English house on the island” – that of the English Consul General. With the Consul and the Bishop of Kisamos, he set off to see the sites on the western part of the island. His first encounter with the ancients was on Cape Spada at Dictynnaeon but the first ancient remains seen by him at Magnia were small and of marble, possibly of the Dictynnaeon Temple mentioned by Strabo (Geography, 10.12). 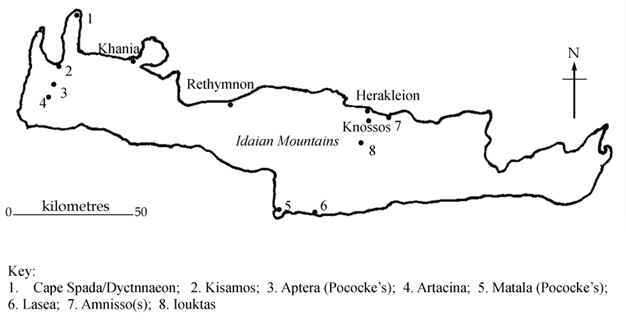 Pococke found a ruined city at Aptera (Palicastro), some five miles from the port of Kisamos. He wrote to his mother on 29th September 1739 about Palicastro:

“Came near to the sea west of Cape Spada … and went south west about 4 miles to Palaio Castro, the old ruined city of Aptera on a high hill, at the foot of which, the muses and the sirens had a trial of musick & the sirens being vanquished lost their wings. We viewed the Antiquities.”

This reference to the ‘trial by musick’ relates to the mythological tale of the victory of the Muses over the Sirens following a musical contest which took place at the city and after which the Sirens plucked off their feathers in sorrow and threw themselves into the sea – Aptera is Greek for ‘Featherless’. The antiquities he viewed included a very antique bas relief (a sepulchral monument) which he purchased. 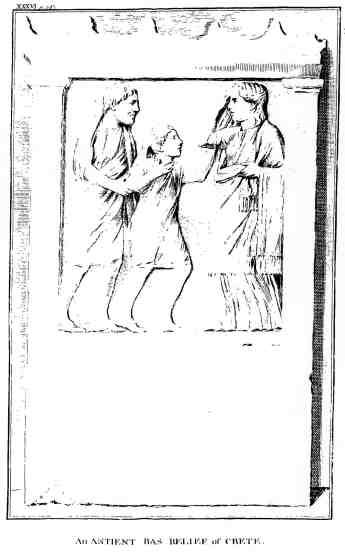 At Artacina, or Rocca, he saw the remains of some rooms which, he said, “the people say belong to the ancient Greeks, and they have some fables relating to it of a giant whom they call Ienes.” Unfortunately his lack of description does not help identify these rooms in any manner.

Pococke left Khania and headed eastward to Retimo (Rethyminon) in order to “make a tour round the island” although he was not to achieve this intention. He then headed south east to Matala where he came across some ruins of Castro Matala and cut into the rocks semicircular niches “hollowed in like graves, and a stone laid over them” but gave no indication of date of the site. He then observed, “In searching for Lebena further to the west, I found a place which I thought to be of greater consequence … that is the fair havens, near unto the city of Lasea; for there is a small bay about two leagues east of Matala, which is now called … Fair Havens.” This is confusing as Lasea (Lisia) is about 6 miles south east of where Matala is today and Lebena is the same distance east of Lasea. He was misplacing these sites – putting Lasea (‘Fair Havens’) where Lebena is today and Matala where Lasea is and Lebena where Matala is now situated (get it? ……. never mind).

At Gortyns (not on the above map but just north of Lasea – 6 on map), Pococke was aware of its early origins, referring to Homer’s mention of it as a walled city (Iliad 2.646) and that “the walls were afterwards destroyed”. Indeed, there are no Bronze Age walls remaining at the city, although it does date back to this period (having been inhabited without interruption since 4000 BC). He described several ruins which would have been most likely Roman, including a theatre.  He did mention the ‘labyrinth’ (see blog in June) but believed it to be “nothing more than a quarry, out of which Gortynia was built … and they might choose to hollow out such a large grotto, rather than work this quarry in the common way, that their families might retire to it on any invasion, and secure their riches.”

At Knossos, Pococke came upon what he thought was the ancient city and observed that it was the place of the labyrinth of King Minos and “In the time of Minos, Amniso was used as its (Knossos) harbour.” Certainly this reference to Amniso(s) as port of Minos perhaps supports the idea that he believed in – and recognized – an early civilization. He did then go on to describe some ruins that he saw, including several large arches which he described as platforms for seats of a theatre.

Not far from Knossos, to the south, is Mount Iouktas (Joukta), the supposed burial place of Zeus. It is not clear whether Pococke actually visited the top of the mountain – probably not as he talked of what the modern Greeks said was up there (a temple and tomb) rather than what he saw for himself, “They relate (my italics) that there was a temple dedicated to him [Zeus] on this hill …”. Turning north he headed for Candia (Herakleion), but other than assuming it may have also been a port to Knossos, he made no ancient discoveries around the town. 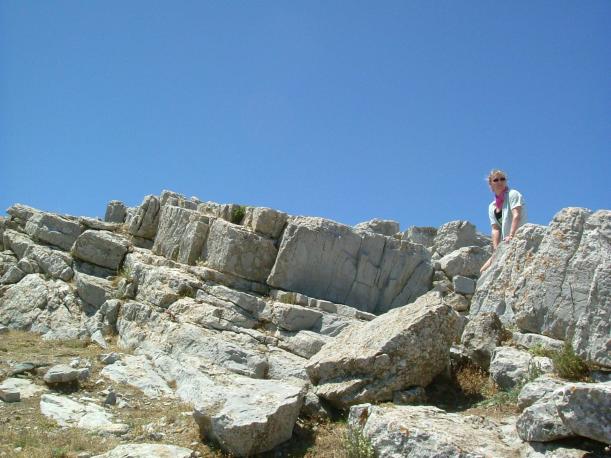 He did ascend the Idaian Mountains (Mount Ida), the site where Zeus was said to have grown up, hiding from his father, Cronos, but Pococke was not impressed.  He made a mere reference to a small rough grotto on the north side of the mountain but the cave that was later to reveal many Bronze Age Minoan artifacts was not a ‘small grotto’ (see pic below).

The cave of Mount Ida

On his return to Khania he announced, “Having seen everything that was curious, I returned to Canea [Khania].” This was to be proven not the case by the likes of Robert Pashley (1830s), Thomas Spratt (1850s) and Sir Arthur Evans (1900s) – much more was to be discovered.

Next week: Whilst on the subject of antiquarian travellers to Crete, let me introduce you to Robert Pashley, barrister.

A crazy place America. I spent some time living and excavating on a farm in Arizona. One day a DEA (Drugs Enforcement Administration) officer called in on me and said, “I need to inspect your farm for illegally grown drugs.” I said, “Okay, but do not go in that field over there,” and pointed out the location.

The DEA verbally exploded and said, “Mister, that’s exactly where I’m gonna start. Reaching into his rear trouser pocket, he removed his badge and proudly displayed it to me.  “See this badge?  This badge means I’m with the Federal Government and I am allowed to go wherever I wish . . . . on any land.  No questions asked or answers given.  Have I made myself clear?  Do you understand?”

I nodded politely, apologized, and went about my business.

A short time later, I heard loud screams and saw the DEA officer running for his life chased by my big Santa Gertrudis bull.  With every step the bull was gaining ground on the officer, and it seemed likely that he would be gored before he reached safety. I threw down my tools, ran to the fence and yelled at the top of my lungs . . . . .

“Your badge, show him your badge!”