SO THERE I WAS preparing a talk on ‘Human Bones and the Law’ when I came upon this case R v Price 1884. Now the law on ownership of bones dates way-back. Basically no one owns bones, not even if they belong to a member of your family. Sir Edward Coke, Chief Justice in the 17th century, pontificated, “The burial of the cadaver [corpse], that is caro data vermibus [flesh given to the worms] is nullius in bonis [among the property of no person] and belongs to the ecclesiastical cognizance.” [1]

Well, there was this Welshman, William Price (1800-93), who had qualified as a medical doctor and became a member of the Royal College of Surgeons of England (having trained in London). He returned to Wales to work as a GP and, in 1823, became the chief surgeon at the Brown Lenox Chainworks in Pontypridd. So far so good.

He then became involved in the Chartist movement (believing in votes for all men regardless of status – next there will be votes for women!) which led to an uprising which led to Price escaping to France. In Paris, at the Louvre Museum, he experienced his ‘turning point in his religious life’ when he saw an ancient Greek inscription which, for some bizarre reason, he interpreted as a Celtic bard addressing the moon. Yeah, okay. This was a sign to him to spread the word of the ‘true secrets’ of the Welsh language and free the Welsh from English dominance. Nothing new there. Anyway, as a result he became a druid and founded a new Druidic group which gained many followers. Just to give you an idea of some of his antics: he christened his daughter Gwenhiolan Iarlles Morganwg – meaning ‘Gwenhiolan, Countess of Glamorgan’; he organised an eisteddfod at Pontypridd but no one turned up (bad marketing); he held a Welsh nationalist parade along with a half-naked man called Myrddin (the Welsh name for Merlin) and a goat … of course.

So wacky or what? But I digress, so now to the point. In 1883, when Price was 83 years old, his second wife, who was in her mid twenties (let’s not go there), gave birth to a son whom he named  Iesu Grist (the Welsh for Jesus Christ) as he had ‘great expectations’ for him. Sadly the child died after 5 months. Price’s religious belief prevented him from burying the corpse as it would pollute the earth. So he decided to cremate him on the hill outside his village of Llantrisant which was ‘not the done thing’ then. In fact, many of the villagers saw the smoke of the fire and attacked him. He was rescued by the police and the child was taken from the pyre before it had been engulfed in flames.

Painting of Price in his famous fox-skinned headdress

Price was then arrested for illegal disposal of a corpse (the police were satisfied that the child had died of natural causes prior to the cremation attempt). At his trial at Cardiff Crown Court, whilst he accepted that cremation was not legal, he argued that there was no law against it either. Going back to Sir Edward Coke (above), the principle here is that if no one owns a body how can it be illegal to do what one wishes with it?  The judge, Mr Justice Stephen, agreed with Price and he was released from custody to much cheering from the people (not the ones from his village obviously). It would appear that cremation was here to stay and on the 14th March Price did, indeed, cremate his son. This led to the newly founded Cremation Society of Great Britain which put sufficient pressure on the government to introduce the Cremation Act 1902 (of which there have been several amended versions since).

The case made Price famous, so much so that a statute of him was erected in Llantrisant in 1982 by the Cremation Society of Great Britain. His wife produced another boy who was also named Iesu Grist for the same reason as his first, the coming of the second (or third) Jesus Christ – he wasn’t (but that is no surprise). William Price was cremated in 1893 on the same hillside as his first son and was watched by some 20,000 people (see pic above). He certainly made an impression! 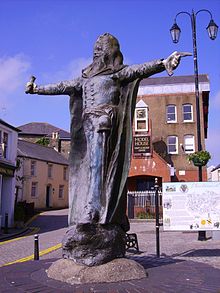 Statute of Price at Llantrisant

[1] Unless they have “acquired different attributes by virtue of the application of skill, such as dissection or preservation techniques, for exhibition or teaching purposes. It thereby acquires a usefulness or value. It is capable of becoming property in the usual way, and can be stolen.” (See the case of R v Kelly & Lindsay 1998 – stealing bones used for educational purposes by a hospital).

Next week: Odd bods: Eadweard Muybridge ….. ‘moving picture-maker’ who got away with murder

My neighbour, George Shortbrain, came into the public house and sat next to me. An unfortunate name but similar to his nature – a man of limited intelligence. The public house had a television set and was showing the 10:00 PM news. The news crew was covering a story of a man on a ledge of a large building preparing to jump.

I agreed to the bet.

Just then the chap on the ledge did a swan dive off the building, falling to his demise.

George was very upset but willingly handed me the five pounds.

George replied, “I did too, but I didn’t think he’d do it again.”

I took the money.

One thought on “William Price – the druid who created cremation”