FACT: Glastonbury Abbey existed in the Middle Ages and still does – to a certain extent.

FICTION (maybe): King Arthur and his two-timing wife, Guinevere, were buried there.

First let’s distinguish between myth, legend and fiction Myth never happened (trust me – e.g. Greek and Roman gods, 6 headed monsters, one-eyed ogres  … actually, I do know someone who might fit that description); legend may have happened (e.g. Geoff Hurst’s 1966 World Cup 2nd goal did go over the line); fiction didn’t happen but some fiction is based on legend (e.g. politicians are honest). Get it? So, legend has it that Glastonbury Abbey was built on the site of a wattle and daub church erected by Joseph of Arimathea when he visited the town with the young boy, Jesus. After the crucifixion of Jesus, Joseph revisited Glastonbury (or the island of Avalon as it was then) with the Holy Grail and buried it below the great hill of Tor – now the site of the Chalice Well. 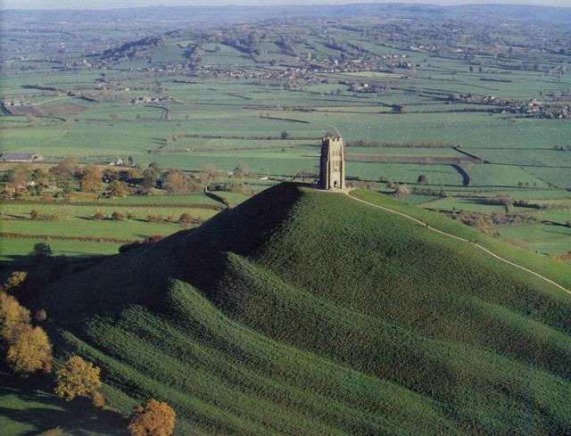 Chalice Well at the bottom of Tor Hill

Fiction (as legend) then moves forward to AD 540(ish) and the death of King Arthur. He was reputedly taken, mortally wounded, by boat to Avalon. There he died and was buried – at Glastonbury in the ancient burial ground (3 on plan), maybe.

Fact and fiction merge: In 1190 it is recorded that the monks dug up a grave in a cemetery just south of the Lady Chapel (not to mention St Dunstan and Galilee chapels) at Glastonbury Abbey. It contained two skeletons, male and female, and they were deemed to be Arthur and Guinevere. It is not clear what happened to them at that time, but in 1278 they were reburied in a black marbled tomb in the Choir/Chancel of the Nave before the High Altar. King Edward I was present, so it must be true (must it? Bit like reading the Sun or the Daily Mail). After the vandalising of the Abbey in 1539 the bones were no longer to be found. 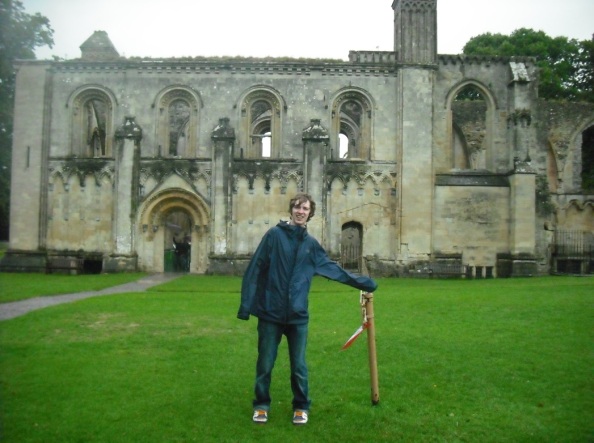 King Arthur’s tomb of 1278 in the Chancel (looking east, High Altar chain-linked in background with ruins of Edgar Chapel behind that)

Back to fact: The first stone church at the site of the Abbey was built by the Saxon King, Inde, in AD 712 and it was enlarged (the cloisters) by Abbot Dunstan in 940. In 1077, after the Norman invasion, this church was destroyed and replaced with a larger one by Abbot Thurstin. Then, between 1100-1118, Abbot Herlewin demolished this church and built the main Abbey. The Domesday Book of 1086 records it as the richest monastery in the country. The building was destroyed by fire in 1184 and rebuilt. Historical records tell us that rebuilding went on until 1524 and the archaeology gives physical evidence of these previous buildings. The Abbey was finally ransacked in 1539 after the dissolution of the monasteries by Henry VIII (there’s someone who had a lot to answer for). Regardless, the remains of the Abbey are well worth a visit. 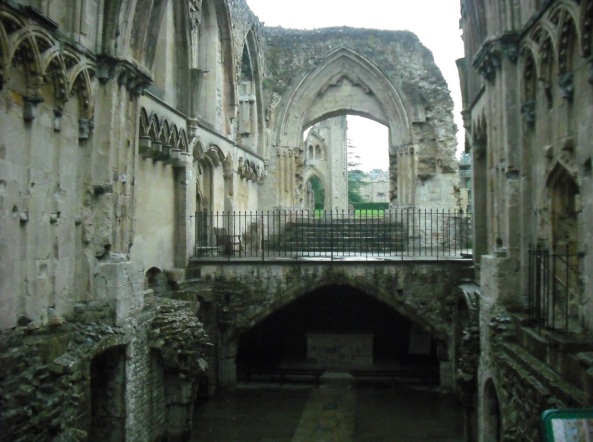 And, of course, Caburn Castle is Camelot …… (it said so in the Sun – or was it the Daily Mail)

Next week: The develoment of societies with archaeological interests

I met an old American friend of mine the other day in the bar of London hotel of some note. It was Douglas Fairweather Jnr, a famous actor over from Hollywood. He was slumped over a whisky.

“Hi Dougie, what’s the problem?” I enquired detecting a state of morose.

“I’ve come over to make a movie of The Merchant of Venice and they want me to play Shylock.” He responded in some despair.

“But that’s excellent old boy,” I retorted with much enthusiasm, “What’s the problem?”

He replied, “But I want to play the Merchant.”