DID YOU KNOW that Forensisis is Latin for forum and in ancient Rome the forum was where many matters, including law and justice, were discussed.  Pathos and logia are ancient Greek for suffering and study of respectively.  The definition of forensic pathology is, therefore, the study of bodies for both medical and legal purposes.

Naturally, one of the tasks of a forensic pathologist is to discover the cause of death of a deceased and to decide whether foul play was involved.  With Tutankhamun such a study proved somewhat confusing over the years.

In a Channel Four television programme, Tutankhamun Exhumed, x-rays in 1968 of Tut’s skull suggested that he had been killed by a blow to the back of the head – evidenced by a hole in his occipital (back of lower head).  Murder most foul?  Of course.  End of story …… or was it?

Back of Tut’s head

Well, maybe not.  Fortunately the whole of the skeleton, although damaged (by Howard Carter when he removed it in 1922) was mostly intact, and a CT scan by Dr Zahi Hawass, in March 2005, showed that the hole in the skull was not the cause of death. It has since been established that inside the hole there are traces of embalming fluid and so it was most likely part of the original mummification process, ca 1323 BC. 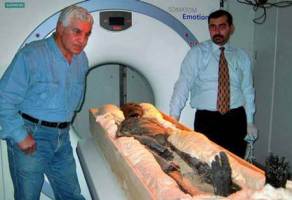 Hawass found evidence of a fracture in the lower femur (thigh bone) just above the knee. The bone had been completely broken and unhealed, with a fragment of torn skin evident. This may have been the result of a blow to the leg in battle, perhaps (or careless cooking incident). This, in turn, may have caused an infection (possibly gangrene) and death. More recent DNA analysis (2010) has identified malaria in Tut’s system. End of story …… or was it?

Now we know Tut was a warrior because we have ancient paintings of him in action (below). So, was the above leg break anything to do with a sword wound in a battle that he may have been involved in?  Maybe. 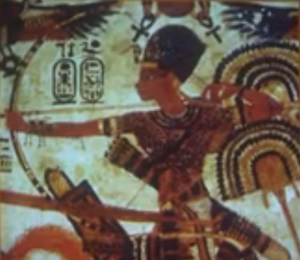 But a further investigation of his skeletal remains in 2012 indicate a more calamitous possibility.  Firstly, a re-review of his 1968 X-rays show that he had several left and right ribs missing, no sternum (front bone of rib-cage), missing left side of pelvis, and no heart (see virtual autopsy pic below).  The heart was usually removed but buried with the body in a separate cask.  The fact that there was no heart in a cask may imply that it was so badly damaged that it was discarded, along with the ribs and left pelvis.  Such damage must have been the result of a very serious incident, although there were no injuries to the skull.  This information was revealed in another Channel Four documentary,  Tutankhamun: The Mystery of the Burnt Mummy, presented by Dr Chris Naunton in 2013.  It concluded that Tut may have fallen from his chariot and was ‘run-over’ by another chariot  –  in battle?

A pressure test was carried out to show that if a chariot wheel hit the rib bones at the speed of 26 mph, the break and bone fragments would be serious enough to cause critical damage to organs behind ribs.  It could also account for the break to the femur (just above the knee).  The wheel would have missed the head, hence no injuries to the skull. 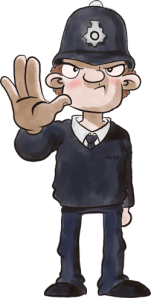 Stop that chariot right there!

A more recent TV programme on the BBC of Tut suggested that he was in no fit state to drive a chariot due to a deformity in his foot which may have been a genetic disorder which he ‘inherited’ due to incest in the family (his mum and dad may have been brother and sister – keep the power in the family). A computer ‘virtual autopsy’ of the mummy revealed a possible club foot and also that he may have suffered from a severe form of epilepsy which could have caused the fall that resulted in his death – perhaps. The clubfoot would certainly account for all the walking sticks found in his tomb. The programme, however, did not address the issue of his missing pelvic and rib bones or the images of him firing a bow ans arrow form his chariot (poetic licence maybe)..

My colleague, Professor Waldorf Winklebatt, was stopped by the police around 2 a.m. the other night and was asked where he was going at that time of night. Waldorf replied, “I am on my way to a lecture about alcohol abuse, smoking and the effects of staying out late on the human body.”

The officer then asked, “Really? And who is giving that lecture at this time of night?”

Waldorf replied, “That would be my wife.”