OF COURSE the Great Escape at Stalag Luft III did take place, but was it like the story depicted by the MGM film?   Well, yes and no. 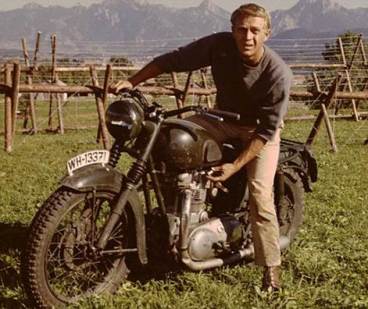 (The bike should have been a BMW but it was a Triumph!)

No, Capt. Hilts did not exist and there was no motorbike chase (sorry Steve McQueen fans) – in fact, there were no Americans in the escape at all.  The tunnels, Tom, Dick and Harry were begun in April 1943 in the north compound and did, indeed, involve Americans. However, in June 1943, the Germans started work on a south compound especially for American POWs. Digging was stopped on Dick and Harry and all efforts focused on Tom to try and finish it before the American POWs were moved to the new compound. Unfortunately, as the film depicted, Tom was discovered – but not the Tom in the film!

The Tom in the film was under the stove. In actual fact, that was Harry which was the real tunnel used for the escape. 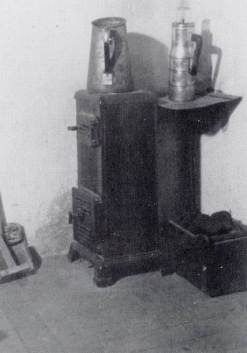 Harry (or Tom in the film)

The tunnel used in the film for the escape, in the washroom, was Dick. Dick was only ever used for storage and not discovered until fairly recently (2003 to be exact).

Harry in the film was actually Dick

So, in the film, Harry was Dick; Tom was Harry;  Dick was Tom. And Bob’s my uncle. Get it?

More recently Harry was discovered by the archaeologists (2011 to be exact – I know ‘cos I was there). It wasn’t fully excavated because it was too dangerous to dig down any further – but an exciting find (honest!). There was nothing to find of Tom because, after its discovery, the Germans had blown it up (dislodging the foundations of a nearby guard-tower in the process – ha!!).

Harry’s entrance discovered in 2011 – not much to look at but exciting (honest!)

Then there was a fourth tunnel, George, begun in September 1944. This was kept a secret but not intended as an escape route. It was heading towards the German compound and its weapons store in case of emergency needs. The war was coming to an end and the POWs were concerned about German reprisals. The tunnel was not discovered until 2011 – same time as Harry (I know ‘cos ….. yes, you know, I was there).

George (the tunnel not the archaeologist – that’s Iain Banks) – the tunnel is the right angle trench behind Iain. Behind and below Iain’s right arm you can just see cable used for lighting the tunnel (when it was being dug by the POWs – not in 2011!)

Plan of the theatre – red line is excavated George; dotted line  is presumed route of tunnel heading towards the German compound (unexcavated)

Very little remains of the huts in the north compound as nature and looters have taken their course. Below pic is one of the ‘better preserved’ (if that is the correct phrase!) 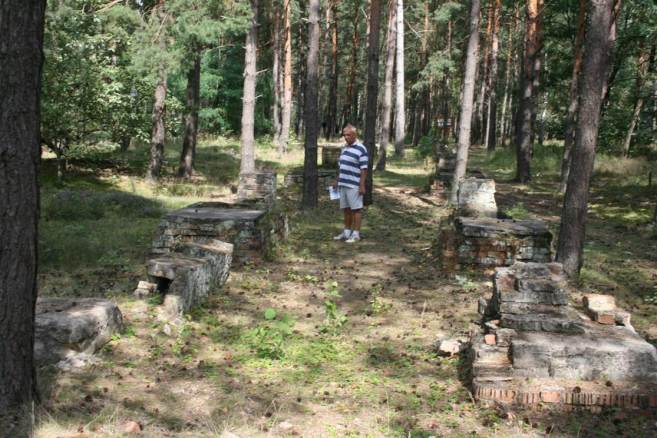 One of the reasons I know all of this is simple – my dad was there. He drew the above pictures of the north compound and the theatre. He flew a Wellington bomber but his engines seized up returning from a night raid over Germany and he crashed, eventually ending up in Stalag Luft III. His involvement in the escape was making the ‘goon’ lamps (oil lamps to light the tunnels before electricity was used – after some chap stole sufficient electrical cable to do the job); he was also a look-out (when the tunnels were being dug, each tunnel hut knew exactly where German guards were at any one time due to an incredibly efficient look-out system).

So my father was the reason my brother and I were visiting Stalag Luft III in 2011 when we came across the archaeologists excavating Harry and George. We happened to have dad’s POW log book with us (to show the museum curator at the site) and the archaeologists were very pleased when we produced the above map of the theatre which they were excavating!

My dad, Flt/Lt Bill Moore – if you have been following my  blogs you may remember the caricature on the right (Artemus Smith). It is in fact of my dad and painted by Henri Picard (click on his name for more details of him), a Belgian POW at Stalag Luft III, but very sadly one of the 50 who were shot following the escape

Whilst my brother and I were at Stalag Luft III in 2011 we met a veteran, Frank Stone. He had told Dr Howard Tuck (who was in charge of the excavations) that he remembered putting a radio set in George. The following week, when they were excavating the  entrance to George, guess what they found? 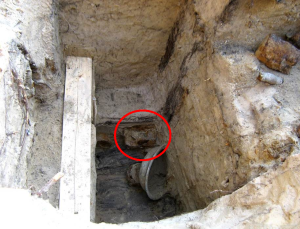 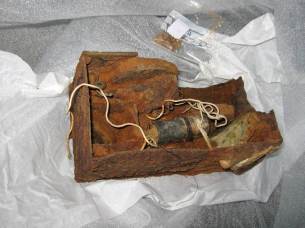 Money and silk maps were smuggled into the camp via Monopoly games. Such secret activity could not be carried out through Red Cross food parcels otherwise, if found out, the parcels would stop. So, an independent organisation had to take up the task – John Waddington Ltd. If the Free Parking square had a red dot on it, the box contained escape equipment. Silk maps were stuffed into the metal game figures and real money was coated with monopoly money (which could be washed off). Because of official secrets (and the possible need to use this form of ‘smuggling’ again), Waddington not was allowed to make it public and bask in the credit – until 2007 (although I think mention was made of it around 1985).

After the escape, the Germans took an inventory of what was missing.  Apart from 76 POWs there were:

How could you miss that lot?!! 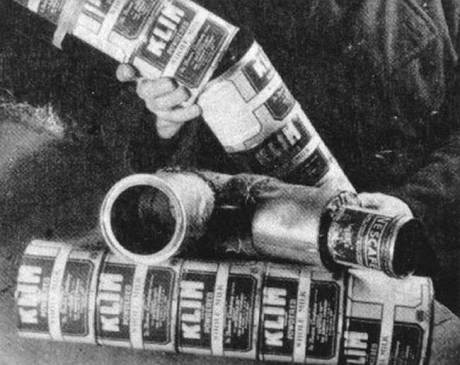 Some of the 1400 KLIM tins used for the air ‘pipes’ for the tunnels – it took me a while to realise that KLIM was MILK spelt backwards (dah!)

The other great escape, also from Stalag Luft III (so much for it being an escape-proof camp!), was more successful – three escapees and all three got home (Oliver Philpot,  Eric Williams, Michael Cundar). It was, of course, the escape made famous by the film ‘The Wooden Horse’.  In fact, Oliver Philpot was once a room-mate of my father’s in the camp prior to the former’s premature departure.

What is interesting is that one of the ‘helpers’ in the actual escape was the film actor (to be), Peter Butterworth (photo above) who was a POW at the time. He was one of the athletes jumping over the wooden horse for hours whilst the tunnel was being dug.  A few years later, when he heard the the film was to made he, naturally, wanted to be in it. His request was refused because the casting director said he “didn’t look convincingly heroic and athletic enough”  !!!!

Next week: Lawrence of Arabia: Hollywood fact or fiction?

I met this remarkable female archaeologist, named Imogen, at a charity ball the other evening. She was wearing a ripping diamond ring and I happened to remarked upon it.

“Oh, that”, she replied, “It’s the famous Haggenflacht diamond.”

I was bedazzled by it.

“ Unfortunately it has a curse attached to it,” she added.

“A curse?” I enquired with some intrigue, “What curse?” 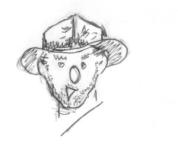 2 thoughts on “The Great Escape: Hollywood fact or fiction?”