I know in my profile I said my main interest was Aegean archaeology but more of that some other time. I also said I was interested in medieval history so let’s start the blog nearer to home – my home in Bramber. Come and visit this great little village at the foot of the South Downs in West Sussex. It is halfway between Brighton and Worthing (near to Steyning). It has a great pub (and hotel), The Castle Inn, a superb Chinese restaurant, The New Bramber Dragon, and a fabulous Indian restaurant, The Maharajah. What more could one want!  How about a medieval ruin?  How about Bramber Castle …..

ONCE UPON A TIME a greedy king came to England from Normandy. His name was William (nothing against King Williams generally of course or there goes my future knighthood). It was in the year of our Lord, 1066. And so it came to pass that William smote King Harold of England and laid claim to his lands.

William divided Sussex into five Rapes:  Hastings, Pevensey, Lewes, Bramber and Arundel (Chichester was not made a Rape until the mid-13th century), all running north to south to protect the coast and communications with Normandy.  Bramber was given to William de Braose who built the castle (and the still extant St Nicholas Church) in or around 1073 and it  was retained by his family until the early 14th century.  In 1324, William VI de Braose ‘leased’ the Castle and town of Bramber to the King (Edward II).  On William’s death, in 1326, he left no male heirs and his co-heirs were his daughter, Aline  (who had, in 1298, married John de Mowbray) and John de Bohun, son of Joan, William’s other daughter (who had married James de Bohun).  On the accession of Edward III (1327), Aline recovered her manors and the Castle was restored to her son, John de Mowbray. And rightly so.

It remained in the de Mowbray family until Thomas de Mowbray’s daughter, Margaret, married Sir Robert Howard.  Their son John Howard, was created Duke of Norfolk in 1483 (Thomas de Mowbray being the first Duke) and the Castle remained in the Howard/Norfolk family (as does Arundle Castle to this day) until it was sold privately to Dr. F. Penfold in 1926.  On Penfold’s death, in 1946, it was purchased by the National Trust (and  is now maintained by English Heritage).  During the Victorian period it became something of a ‘leisure park’ when it was leased to the brewery of the local pub, the White Lion (now the Castle Inn).

It would appear that the Castle was not used to any great extent once it had passed to the de Mowbray family.  There is a record of two pirates being held there in 1355.  Archaeological evidence suggests that the Castle was no longer in use (as a castle) after the mid 15th century, whereafter a lack of maintenance and robbing of stone for building material use elsewhere has caused its decline.  In William Camden’s survey of Britain of 1586, he reported that the Castle was a ruin. As can be seen from the Hollar drawing below (existing gatehouse wall is right foreground), it was certainly a ruin in the 17th century. All very sad of what was once such a grand complex.

When William VI de Braose handed the Castle over to the king in 1324, it underwent repairs, the work of which terminated in November 1326 – on the death of William.  There are no further reports of repair work.  During the reign of Richard II (1377-99), there was concern amongst the Sussex locals that the county would be in threat of destruction should the French invade.  The king was petitioned to garrison the Castle but there is no record that this occurred.

There has been a suggestion that it was fortified during the Civil War and blown up by the Parliamentarians.  There is no evidence for this, although there was a skirmish, in 1643, over Bramber Bridge (by St Mary’s House), which the Parliamentarians were defending.  There is reference, in personal letters of the time, of a ‘fort’ and defensive ‘workes’ at Bramber but, although they could be references to the Castle, they could just as well be references to the bridge.  Certainly the bridge would have been an important position to hold (rather than a ruined castle on top of a hill) to prevent the Royalists proceeding east. 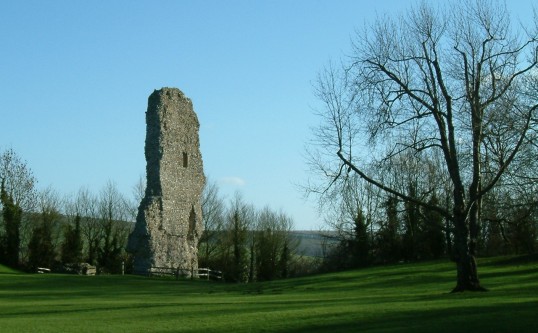 Despite the Castle’s neglect, it is still a fascinating site to see, with its solitary gatehouse wall, its tree covered motte and its spectacular views over the Sussex countryside – a haunting reminder of what was, nine centuries ago, a formidable bastion of its time.

The title ‘Keeper of the Keys’ of the Castle dates back to 1291. In 1346 the recorded salary was 30 shillings a year. I mention this merely because I am now the ‘Keeper of the Keys’ which sounds very grand (well, I think so) but, although I do have some old keys (I won’t say where they actually came from as that would spoil the mystique) there is no door for them to open.

Next blog: I’ll ramble on a bit about the architecture and archaeology of the Castle.