King Minos and the Minotaur

THOMAS ABEL BRIMAGE SPRATT RN (see first blog on Crete) said of Crete, “A charming land without legend, some may feel, is like a bird of bright plumes without song.” Legend or myth would be used to explain the unexplainable but it might be said that anthropologists would now consider that myth holds some information relating to fact. To some extent such recognition owes its credence to the likes of Heinrich Schliemann with his discovery/publication of Troy and Mycenae (more on these later) giving a ‘ring of truth’ to the Homeric poems (on the Trojan War), and Sir Arthur Evans for the discovery/publication of the ‘Minoan civilization of King Minos’.

So was it King Minos who colonized Crete and built up a supreme navy (Minoan thalassocracy), clearing the Aegean of pirates? Well, we have no evidence to say he did, but we have no evidence to say that he didn’t. As the tale goes, he built a labyrinth (although labrys, in Greek, means double-axe, and labyinthos is house of the double-axe) and deposited in it the Minotaur. This creature had the head of a bull and the body of a man and was the off-spring of Minos’ wife’s dalliance with a bull (don’t ask). Minos’ wife was Pasiphae and a bit of a ….. well, lets leave it there. Each year seven girls and seven boys, on reaching maturity, were sent from Athens to Minos as ‘blood tributes’ (for the death of King Minos’ son, Androgeos, killed in Athens during the games) and they were thrown into the labyrinth to be savaged by the Minotaur. Seems a bit severe if you ask me. You get the impression that Minos was not the sort of bloke you argued with. Minoan Mafia.

The ‘labyrinth’ at Gortyns in Crete (more on this next week)

Theseus, son of Aegeus (the King of Athens) volunteered to be one such sacrificial offering. But when he arrived, Minos’ daughter, Ariadne, fell in love with him (as girls do in myths), gave him a sword and some string to tie to the entrance to find his way out of the labyrinth. He duly slayed the Minotaur and escaped with Ariadne. And everyone lived happily ever after. Well, not quite.

Daedalus, the architect who built the labyrinth and had given Ariadne the idea of the string, was in trouble with Minos. So he (Daedalus), and his son, Icarus (or Ikarus if you want to be Greek about it), escaped by making wings of feathers stuck together with wax. Unfortunately, contrary to his father advice, Icarus flew to close to the sun; his wax melted and he fell to his death. No surprises there. Daedalus did get away but Minos pursued him. He found him by setting a task for whoever he visited, believing only Daedalus would resolve it. He produced a shell and challenged anyone to work out how to get a spider through the middle of it. On arriving at Kamikos in Sicily, where Daedalus was hiding, the shell was given to the architect, who threaded a piece of cotton through a hole in the centre of the shell and covered it in honey – off went the spider through the hole. Oops, Daedalus had given himself away and must be doooooomed. But no. The daughters of the King Kokalos favoured Daedalus and his tricks and so killed Minos by pouring boiling water over him whilst he was in his bath. Nasty (‘don’t mess with the female of the species’ comes to mind). Then everyone lived happily ever after. Well, not quite. 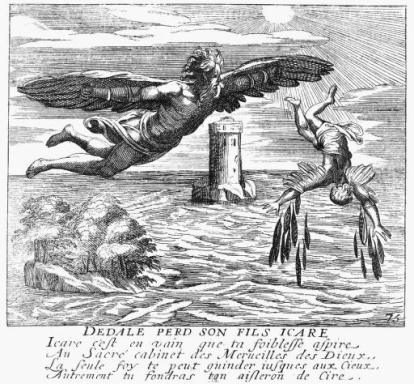 no need to translate – you get the idea

Theseus sailed home to Athens but unceremoniously dumped Ariadne off at Naxos, an island just north of Crete. There’s gratitude for you. She overcame her grief and took up with the god, Dionysus (some tales say she was already married to him before meeting Theseus but that would be naughty). On approaching Athens Theseus forgot to change his sail from black to white – the sign to his father, King Aegeus, that he had lived. His father, seeing the black sail, assumed his son had died and threw himself off a cliff into the Aegean Sea (hence its name, clever, huh?). There is a moral here somewhere (probably ‘don’t mess with the female of the species’). Then everyone lived happily ever after. Well, if by ‘everyone’ we mean Theseus as he was the only one left, the answer is no, he was later thrown off a cliff in Skyros by Lycomedes. Ho hum.

So there you have it. Or not.

Next week: The real ‘labyrinth’ of Crete

I recall as a student I had again failed to complete my tutorial topic for discussion. I thought that maybe if I acted strangely my tutor would send me home. So I hung upside down on the ceiling. On this occasion, there were two of us in the tutorial and my colleague, Edward, asked me what I was doing? I told him that I was pretending to be a light bulb so that the tutor would think I was losing my mind due to working too hard and suggest I go home for a rest.

A few minutes later the tutor came into the room and asked, “What are you doing Smith?”

I told him I was a light bulb.

He said, “You’re working too hard – go home and rest.”

I jumped down and walked out of the room suitably relieved.

When Edward followed me, I heard our tutor ask him, “And where are you going?”

He replied, “I can’t stay here in the dark.”